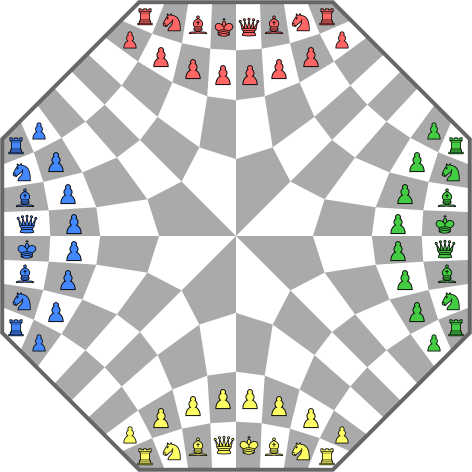 Four-player chess variant played on an octagonal board.

The board can be created by deforming and joining four normal half-chessboards.

Movement of the pieces

The rook – like in standard chess – moves along the gridlines of the board. This means that it leaves the fields on the opposite side when it entered. The direction of the rook is sometimes bending, and not the physical straight path.

The bishop moves along the diagonals of the grid like in standard chess. This means that it leaves a field through the opposite corner to where it entered. This direction can also bend in this board.

The queen combines the power of the rook and the bishop.

The king moves to adjacent fields ortogonally or diagonally, except that through the center of the board it cannot move to all possible vertex-neighbours, only to the two beside the edge-neighbours. It can thus move in the same the directions as the queen, but only to one field distance.

Castling works the same way as in standard chess.

The knight, like in standard chess, moves one field in one orthogonal direction, then two in the other, or vice versa: two in one direction and one in the other. On normal chessboard, these two sequences have the same effect, but on this board around the center they may differ, and this may give more than eight possibilities to the knight.

The knight, like in standard chess, always moves to an opposite coloured field than it just left, and the possible destination fields form a more or less circular shape.

A pawn always moves away from its own base, to one of the opponent's base. So from its own quarter-board it moves towards the center, and from an other quarter it moves towards the edge of the board. The pawn, like in chess, moves in rook's direction, and captures in bishop's direction. When it captures through the center of the board, it has two options like the bishop.