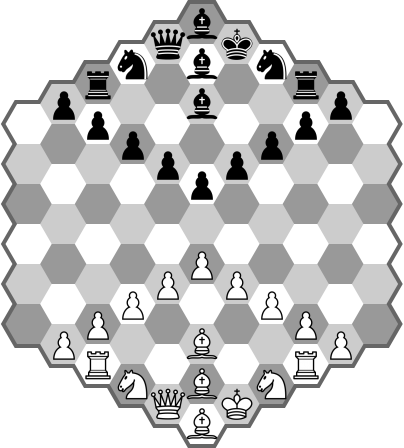 One of the most known hexagonal chess variants, played on a regular hexagonal board. Each side has three bishops and nine pawns.

Movement of the pieces

Pawns move towards the opponent's side. They capture obliquely forward to an adjacent field (in rook's directions). They can advance two fields from their initial position. When a pawn moves to an other pawn's initial position by capturing, it can still make a double-move.

Pawns promote on the opposite two edges of the board.

Otherwise the rules of chess apply, with the following difference:

Władysław Gliński, 1936[ChV.com] – the difference is that Gliński's original version counted stalemate as not a draw, but a half-win (3/4 points), while on this site it counts as a draw (1/2 points) like in standard chess.